The Selfish Meme - A Conjecture

The Selfish Gene was first published in 1976. Written by Richard Dawkins, probably now more famous, or at least more controversial, for his 2006 work, The God Delusion, its central theme is the notion that animals and plants are no more than "survival machines" manipulated by Genes to behave in a way that maximises the gene's chance to persist into subsequent generations. Clearly, individual animals and plants cannot be immortal, but genes can be. Certainly, genes persist far longer than individual survival machines.

In The Selfish Gene, Richard Dawkins coined a new word. This word is "Meme". His original definition is (I'm paraphrasing) "an idea, behaviour or style that spreads from person to person within a culture". Chapter 11 is entitled "Memes - the new replicators". In this chapter Dawkins describes how memes can be thought of as defining culture to an extent. In this sense, he is using culture to mean the culture of a society. Different cultures around the world and throughout human history have evolved a way to pass knowledge from one generation to the next such that the culture persists even though the individuals within the culture clearly do not.

Most people probably now think of a meme as a thing, designed to be amusing in some way, that circulates, possibly "going viral", around the Internet. Some of my favourites would be Disaster Girl, XZibit - Yo Dawg (see one I made below) and the classic scene from Downfall. This last one is a sub-genre of meme where you put subtitles on some scene which are hopefully amusing in some way but are clearly not the originally intended dialog.


My XZibit - Yo Dawg Effort

Apparently XZibit is some kind of musician, a rapper I believe. He also was the presenter on a TV program, which I never watched, called "Pimp My Ride". It is from that program that I understand the Yo Dawg meme originates (I'm happy to stand corrected if I'm wrong, Know Your Meme doesn't talk about the origins of the meme, just the recursive structure). What I love about this meme is that "correct" use of it demands a recursive usage. I didn't immediately appreciate this and was told by a colleague that my use was incorrect and it had to include some kind of recursion. At the time, we were working on a Clojure implementation for our client. Imagine my joy then, when a few weeks later, I found out that the Clojure defMacro, which I had assumed was a keyword, was in fact itself a macro. I saw my opportunity to correctly use the Yo Dawg template and came up with something like this (my original is lost in the ether somewhere, so this is my best effort at a reproduction): 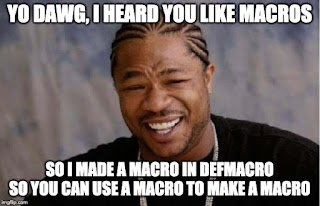 The Beginning of Infinity

David Deutsch's "The Beginning of Infinity" was first published in 2011. It is a study of epistemology. This isn't what I expected when I bought the book (I was expecting something about quantum physics or quantum computing and I never read the blurb), but it was still one of the best books I've ever read. Deutsch puts across an interesting conjecture. Running with the Dawkins idea that memes can define culture he argues that the rigid rules of the Spartan culture, passed from generation to generation as memes, eventually placed too many constraints on its ability to innovate. Thus, the Athenian culture, with its memes around learning and progress, was eventually able to finally conquer and all but destroy the Spartan culture.

So taking the two ideas together, Dawkins idea that memes can define culture, and Deutsch's idea that these memes can eventually be counter productive or damaging, led me to wonder if organisations in which I have consulted can have their culture classified or defined by their memes. If that is so, then perhaps by introducing competing memes (alleles) and somehow altering the value that the memes confer to its vectors, could I have a model for driving positive change?

I don't have a conclusion yet. I've been working on this idea and experimenting with clients that I've worked with. I don't yet have enough data points to draw strong conclusions but it has been fun and I've written a talk about the subject which I'll be presenting for the first time at Aginext in March this year. I was also asked to write an article for InfoQ on the subject. As soon as that goes live I will post a link to it from here.