I already blogged about Devoxx Belgium. That was a few weeks ago now. The week after that, on Thursday November 22nd, I flew out to Kiev for Devoxx Ukraine. The conference was on Friday 23rd and Saturday 24th, I flew back on the evening of Sunday 25th.

After a couple of days recovery at home, I flew to Marrakech for Devoxx Morocco early in the morning of Wednesday 28th November. I was out of bed at 4:30AM for a 5:00AM taxi. It was (almost literally) a flying visit. I got to the hotel in the early afternoon, had lunch, walked to the conference venue, had a look around, met a friend, walked back to the city, had a look around, had dinner, found what seemed like the only place in Marrakech that served beer, had a couple, went to bed, got up, went to the conference, did my talk, saw my ThoughtWorks colleagues talk, had a quick beer with them, got a taxi to the airport and flew home. I got back home around 1:00AM on Friday November 30th meaning I had been out of my house for only 44 hours. Not surprisingly I was somewhat tired.

So in three weeks in November I presented 6 talks at 3 conferences in 3 very different locations. At the time of writing Devoxx has published the videos from Belgium and the photos from Belgium and Ukraine. I thought I would commit some of the highlights to this blog.

I already wrote about Devoxx Belgium and posted a selfie from my talk Agile is a Dirty Word. While I was in Ukraine I had a chat with Stephan Janssen, the founder and owner of the Devoxx conferences, amongst other things about how the new Devoxx websites and apps work. In Belgium, Alasdair Collinson had postulated to me that the Devoxx app was reassigning talks to rooms based on the number of likes that people had given the talk synopsis. He therefore speculated that my talk had been moved from one of the smaller rooms to the largest room in Antwerp. Stephan confirmed that this speculation was indeed correct. As my talk had in excess of 3x the next highest talk scheduled at that time, it was indeed moved to the biggest of the 8 theatres. He further went on to tell me that there were 850 seats in that theatre (I had it at around 300 - 400) and that he estimated that there were in excess of 900 people watching given the number of people that were sitting in the aisles.

Here is a picture of me with part of that audience and the MASSIVE screen behind me... 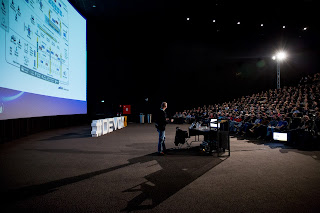 Just to keep my feet on the ground, here is a picture that they smuggled of me when I was finding the only quiet place in Antwerp to have a remote meeting with some of my ThoughtWorks colleagues on the Wednesday afternoon: 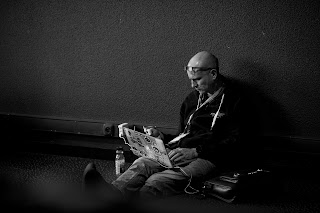 Some Kind of Weird Dance

I never script my talks. I use the slides, which have been occasionally (and quite fairly I think) been criticised for being too wordy, as the basis of starting the conversation that I'm going to have with the audience about the subject that I'm raising. One side effect of this is that each time I present a talk it is different and I can't guarantee that I'm going to say the same things or emphasise the same points. Sometimes it goes off on weird tangents. I haven't watched the whole of the video from this talk yet but when I do, one thing I'll be curious about is what, exactly, I was doing when these photos were taken: 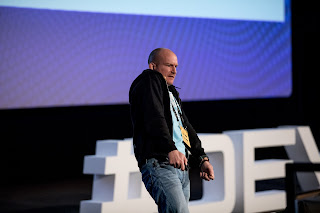 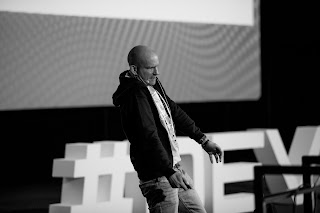 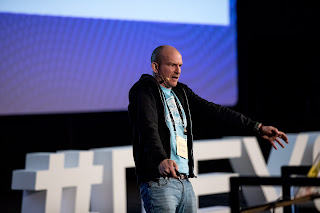 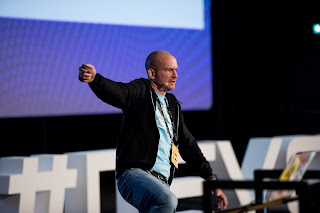 From the outset I was set to present two talks at Devoxx Ukraine. They were What Drives Your Development and Are Quantum Computers Really a Thing? (quick disclaimer, these videos are not from Ukraine because at the time of writing the Ukraine videos weren't available). After the success of Agile is a Dirty Word in Antwerp, I noticed that there were a handful of sessions in Ukraine that were TBC so I sent an email to the organisers directing them to the video from Antwerp and suggesting that I would he happy to present this talk again. They duly scheduled me as an added bonus. So three talks it was in Ukraine!

One thing that was noticeable about Devoxx Ukraine was a distinct lack of diversity. Of course the IT industry is notoriously male-centric but unfortunately Devoxx Ukraine was almost a female free zone. There were almost more female speakers than attendees. Not the fault of Devoxx of course, it just goes to show that some parts of the world haven't moved on as much as others.

The Trip to Chernobyl (nearly)

The conference kindly organised a trip to visit the Chernobyl reactor on the Sunday morning. Prior to the trip we had to submit our passport details to satisfy some kind of security protocol with the Ukrainian authorities. Whatever the security checks are (and I assumed them to be some kind of security theatre) one, or perhaps more than one, member of the party was declared persona non grata by "the authorities". So on Saturday morning we were told that the trip was cancelled. Apparently if one person in the group is considered unacceptable then none of the group is allowed to visit. At least that left us free to enjoy Saturday evening as it meant we no longer had to meet in the hotel lobby at 6:30AM to get a coach to the site of a nuclear disaster.

Some Memories from Kiev

I cropped this one and used it as my new profile photo in various places. 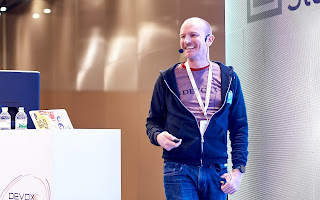 I didn't realise there was a telly with the slides on it. I could only see the thing behind me. 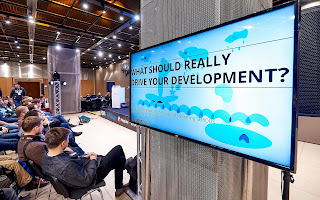 There was a laser lattice thing on the way in to the conference. 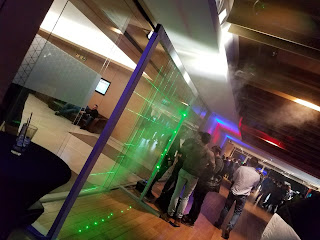 There are lots of yellow buildings in Kiev including this rather wonderful cathedral. 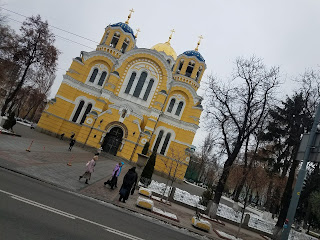 And some rather less impressive looking architecture. I was particularly perplexed by the way this 1980s-(presumably Soviet)looking-grey-building thing appears to be sort of glued on to the rather pleasant yellow building next to it. 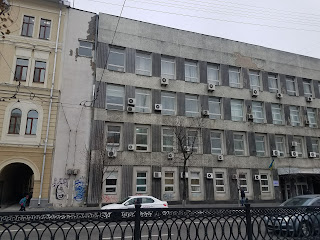 Here is my ThoughtWorks colleague Aiko with me as we were on the main stage with the other speakers during the closing ceremony of the conference. 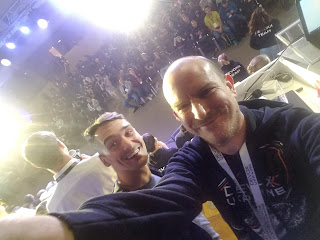 And finally here is the picture of all the speakers on the stage at the end.

Another great conference from Devoxx. Very well organised but Ukraine must try harder on diversity.

I was truly exhausted even before I flew to Morocco. Given the swift in and out nature I didn't get to see much of the conference. It was a lot smaller than both Belgium and Ukraine but, somewhat surprisingly, extremely diverse by comparison. There was apparently around 30% female attendees where both Belgium and Ukraine were under 5%. Probably this is up there with the most diverse of conferences I've been to. My guess is Agile on the Beach or Lead Dev in London have the highest proportion of female attendees that I've known but I have no data to back that up.

My only talk in Morocco was What Drives your Development which was being wheeled out for the third consecutive week. It went down pretty well again, this time without the time honoured Martin Fowler from Eastenders joke. I decided that since that joke falls flat in Western Europe and Eastern Europe, in fact anywhere other than the UK, it would almost certainly fail in Africa!

I didn't realise that the snow capped Atlas Mountains would be visible from Marrakech. 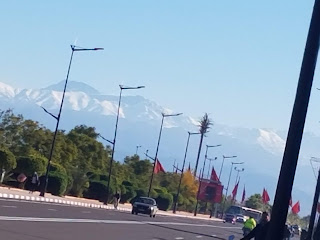 I saw this cat in the city centre. A cat with markings that look like a heart! My daughters love this cat and I will surely work it into some presentation somewhere. I have to, Woody Zuill told me that you should always put at least one cat slide in every presentation... 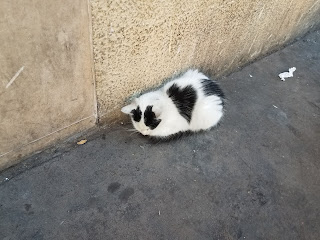 The square in the old part of Marrakech is quite spectacular at night. 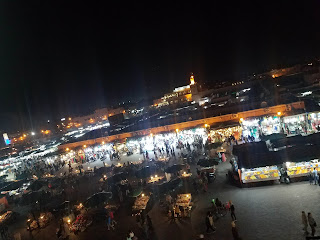 My colleagues Oli and Monira presented this talk in both Belgium and Morocco. I missed them in Belgium as they were talking on the Friday and I was gone by Thursday evening. 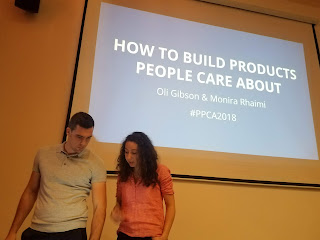 And thus ended my November World Tour of conference speaking. I have nothing more planned until January, which is Snowcamp in Grenoble. For now, back to the harsh realities of working for a client, if only I can get staffed somewhere...